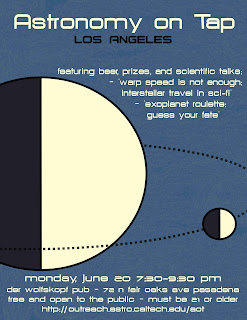 Tonight we had our very first ever Astronomy on Tap event held in Los Angeles, and it was a wild success!  Astronomy on Tap is a nation-wide phenomenon where professional astronomers give informal talks in local bars on a variety of scientific topics followed by lots of discussion and interaction with the public.  Until now, there have been no organized events happening in Los Angeles, but we at Caltech are partnering with several other neighboring educational institutions to make this happen. 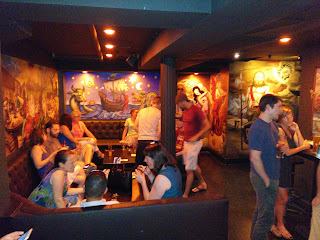 We held our first event at Der Wolfskopf, a german beer bar located in Old Town Pasadena gracious enough to offer us happy hour prices all night on food and on one of their beers.  The event was structured to have two short astronomically-themed talks with 15-minute intermission periods separating them.  During each intermission, audience members were encouraged to talk to the astronomers present in addition to playing our astronomy quiz that was being broadcast on the television sets. 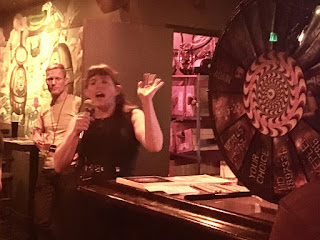 Dr. Jessie Christiansen gave our talk for the night entitled "Exoplanet Roulette: Choose your Fate".  The premise is that you have the opportunity to travel to some exoplanet in the Universe, but you don't know which one.  By spinning the game wheel, you discover which exoplanet where you'll end up. 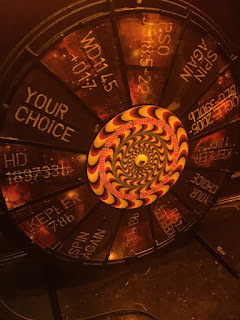 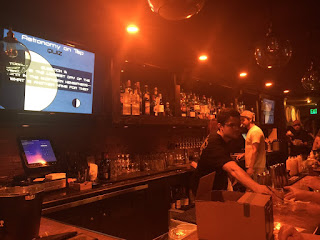 Unfortunately, our second speaker had an emergency and wasn't able to join us.  We had a short panel Q&A with the variety of astronomers present, where prizes were awarded for particularly good questions from the audience.  Lastly, we finished the night by grading the trivia quizzes that people had submitted.  There was a three-way tie with 8/10 correct, and each winner won a prize of a NASA shirt or mug.  Congratulations to all of our winners! 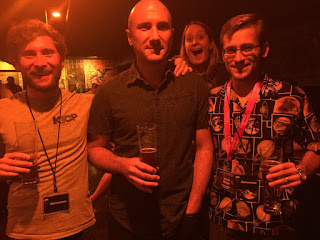 Thanks to all 70 of the attendees and we hope you'll spread the word about our next event in a month on Monday, July 25 at 7:30PM.